One can’t cover the opening of a restaurant without discussing the food that is imagined, tried, tested, tweaked and finally served with ever-loving care. Fiorino started as a dream to bring authentic Italian sandwiches to Vancouver but has since blossomed into a pretty happening spot for dinner as well. We spoke with Chef Mario Ruiz about some of the inspiration and endeavour that has gone into some of his favourite menu items. 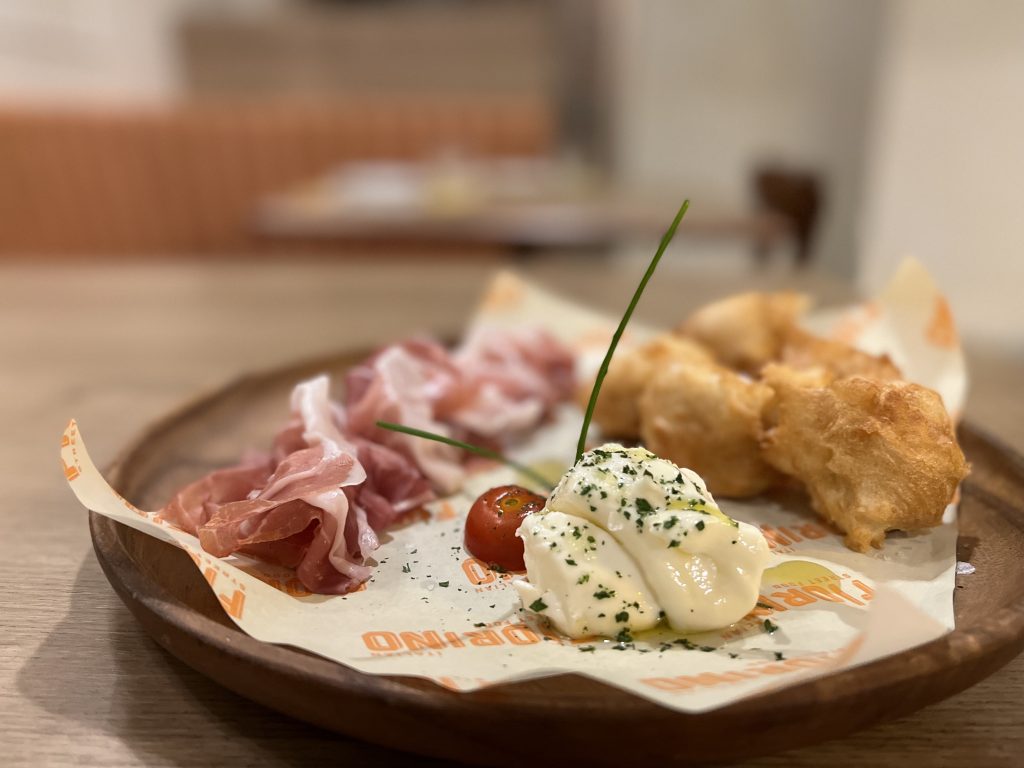 “You’ll find this particular dish on the menu at every trattoria or osteria in Florence. So it was a no-brainer when we were putting together a menu for Fiorino. In fact, it was probably the first thing to go on it. But, it wasn’t actually there for the first few weeks we were open because we import the stracchino cheese direct from Italy and it proved to be more difficult than we thought. But now we’re the only spot in town where you can get it – and we sell out pretty much every night. Also, for us, it’s a good way to cut down on waste as we use the dough that’s leftover from making our schiacciata bread. We just let it proof for another 24 hours. Coccoli actually translates to ‘cuddles’ because they turn out so soft and pillowy.” 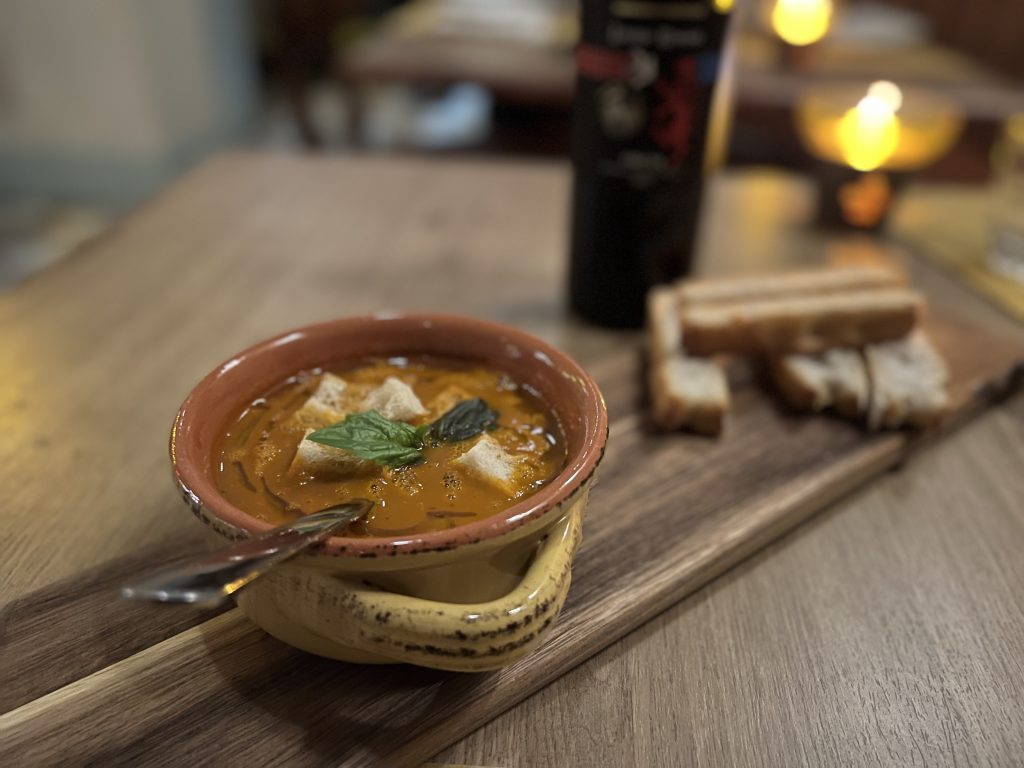 “As [co-owner] Giovanni says, ‘There’s nothing more Florentine than a bowl on a board.’ This is another staple from Tuscany. Traditionally it’s made very simply from tomatoes, olive oil, basil, and garlic, and then stale bread that is whisked into the broth to thicken it. Again, a great way to make sure we use all the bread we make for sandwiches each day. We stick to the proper ingredients but I wanted to keep the bread in bigger chunks and let them sit. It just makes for a bite that’s a little more fun. It’s a nice way to open your appetite and get ready for your meal.” 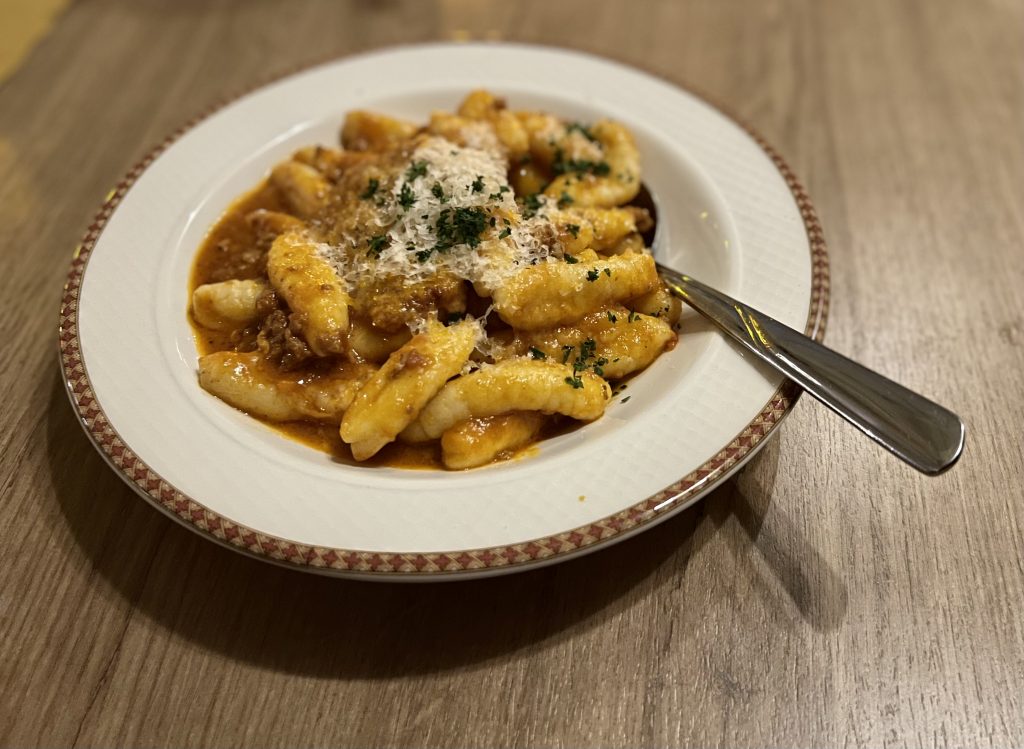 “When I was doing my research, I found — not surprisingly — that there are as many different recipes for gnocchi as there are culinary regions in Italy – which is to say, a lot. I ended up combining a couple processes after some trial and error until I found the texture we were looking for. Not too chewy, not too soft, we’re going for 2 to 3 bites per gnocchi and you’re on to the next one. We make a batch fresh daily. One of my prep cooks, we’ve dubbed our ‘Gnocchi Guy’ because starts every day at 9:30 am ricing the potatoes and he doesn’t stop for 4 hours until they’re done. As for the sauce, we chose a wild boar ragu because it’s just so Tuscan. We source our boar from a butcher right here in Chinatown.” 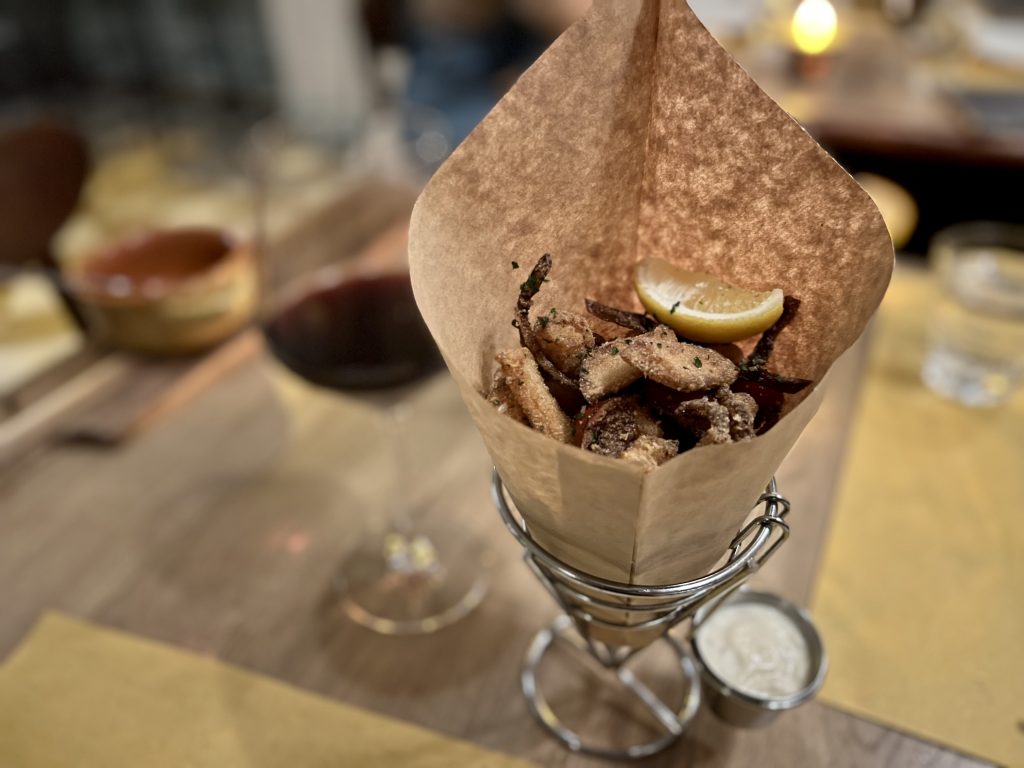 “Fritto misto is a traditional port-city snack all over Italy, especially in Livorno which is the main port-city in Tuscany. Fishermen come back at the end of their day and take all the small pieces from their haul, like minnows, calamari, octopus. And they’ve got fryers right on the boat. They coat the pieces in semolina flour for some crunch and sell them wrapped in a paper cone right there on the docks. We’re not out there fishing, but we do bring in local seafood, again from right here in Chinatown. We serve it with our house-made roasted garlic aioli for a little kick.” 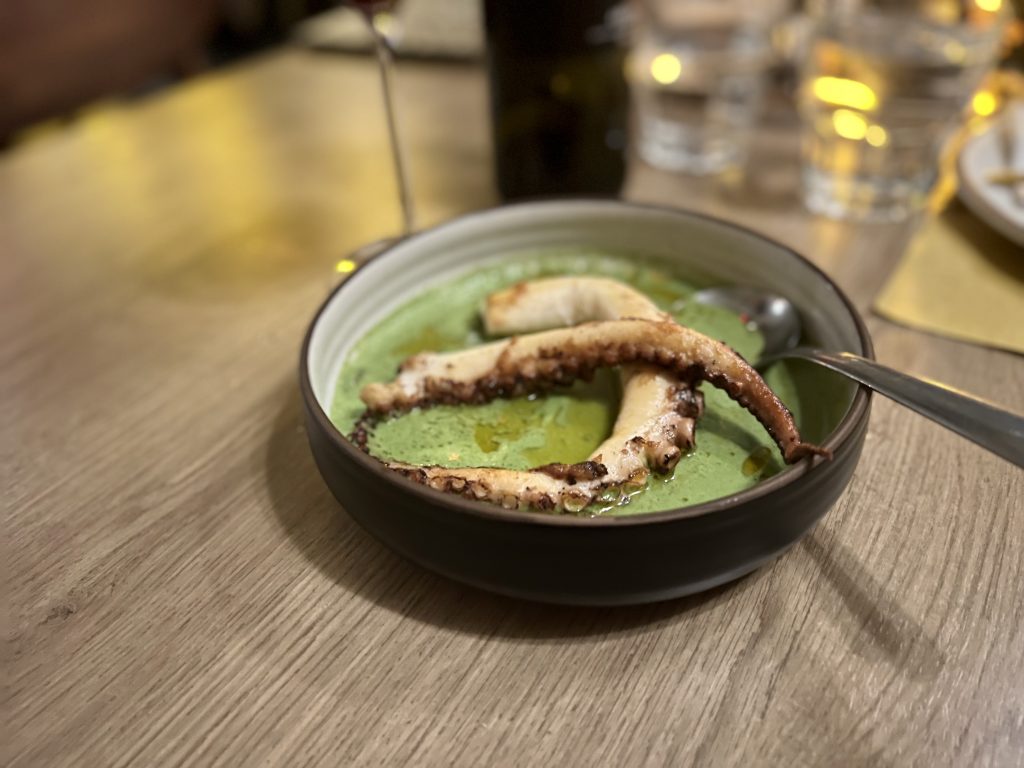 “I’ve always loved octopus. It’s something I grew up on in El Salvador, and I learned how to treat it properly from a Catalan chef I worked under at Bishops, Macia Bagour, who was instrumental in refocussing me on my journey in cooking professionally. We bring in octopus from Italy, so it’s Mediterranean octopus which is meatier and more flavourful than Pacific octopus thanks to the saltier water it lives in. We finish it with a roasted pistachio sauce so you get a good earthiness to complement the flavour of the sea.” 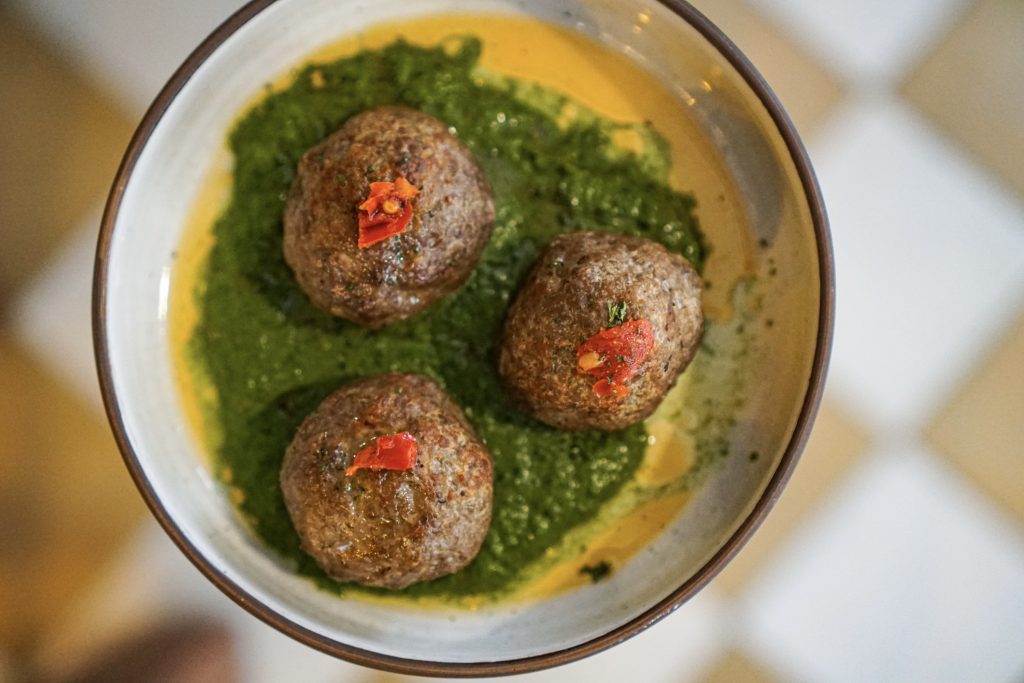 “A lot of meatball recipes contain pork, or some other fat, to keep them tender and moist. But our polpette are %100 lamb, we just cook it right. The only flavours you get are the lamb and oregano. I wanted to keep that slight gaminess you get with lamb and cut it with a pungent salsa verde that’s a simple blend of parsley, lemon and a dash of sherry vinegar for sweetness. Like everything on our menu, simplicity is king.” 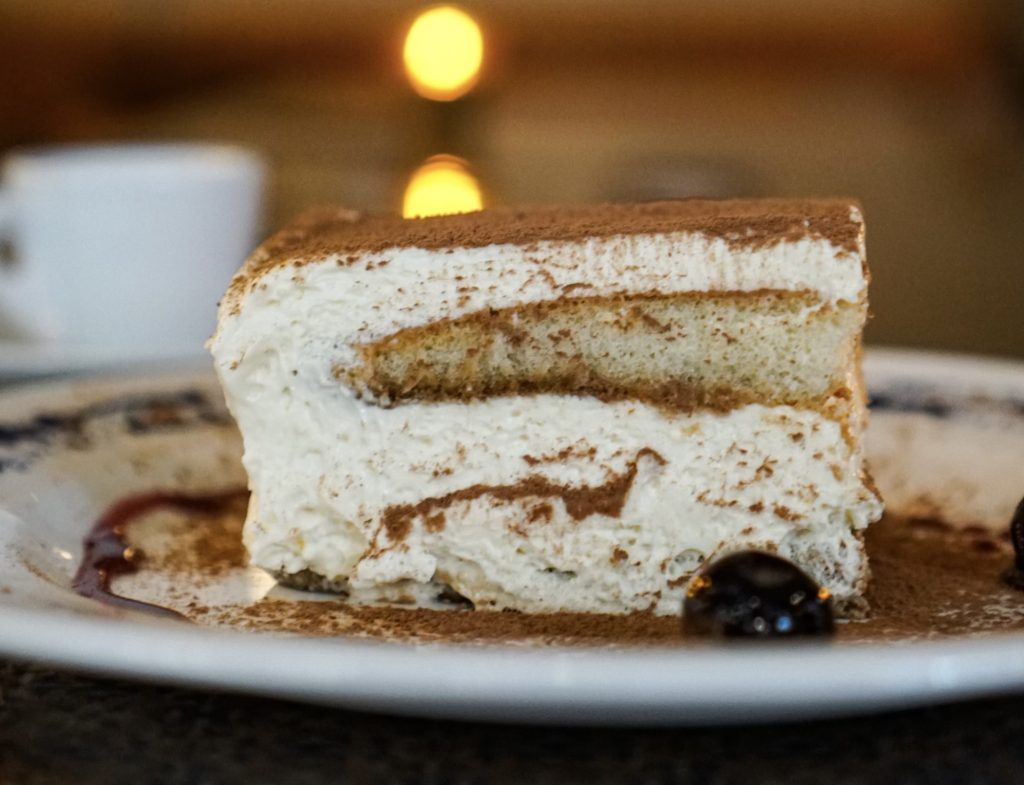 “Could we open an Italian restaurant and not serve Tiramisu? Not likely, and I wouldn’t want to try. Our recipe uses 100% mascarpone cheese from Italy, through our friends at Bosa Food –  where we get most of our Italian ingredients actually. We don’t cut it with a single thing so you get all of that richness and creaminess. We use espresso, not black coffee, not coffee liqueur. Beans from Umbria which in our humble opinion is the best coffee in town. Then we finish it with lemon and orange zest for freshness, and a few Amarena cherries.”

Fiorino is at 212 East Georgia in Vancouver’s Chinatown.
Transit: A short walk from Main Street-Science World Skytrain Station, and near bus stops for the 8, 3 and 19 busses. 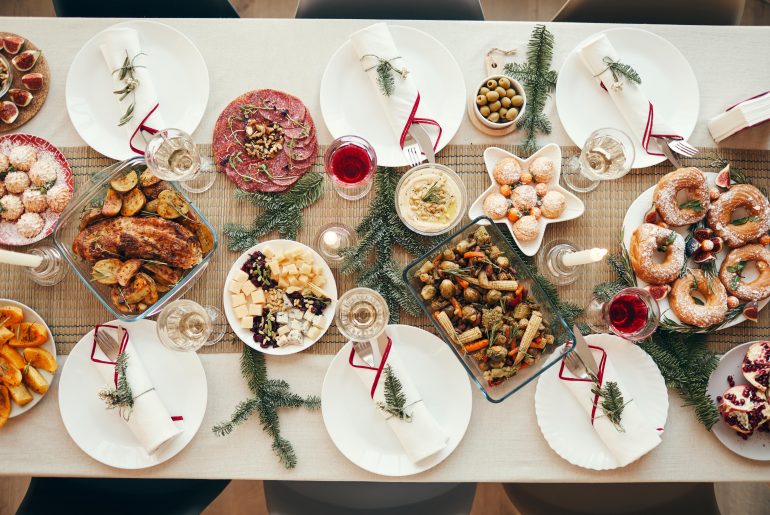 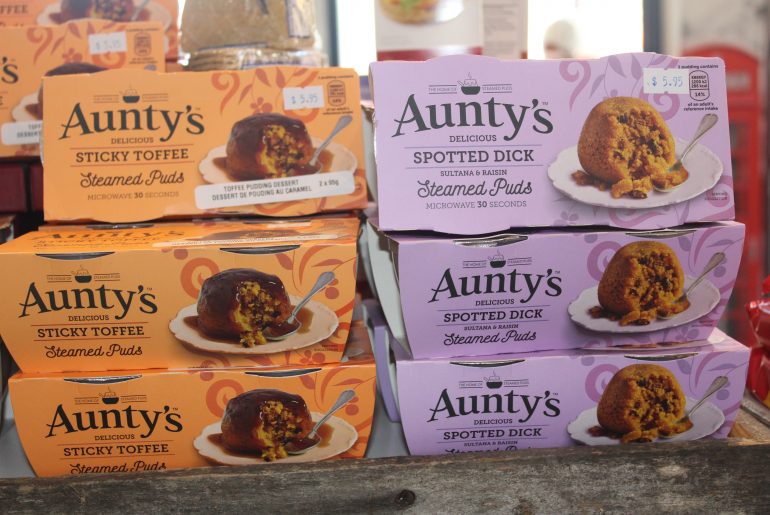 5 Flavoursome International Food Shops In And Around Vancouver