If we weren’t looking for it, we might not have found it. Even then, we almost didn’t.

In a little retail complex that blends into the space between the rest of the progress on 2nd Street in North Vancouver, tucked away under signs for other businesses, sits South Castle Korean. A tiny sign in otherwise black tinted window, the only suggestion of the bustle happening inside.

When we showed up on a sunny Sunday afternoon, an easy walk from the Lonsdale Quay where the Seabus brings you from downtown Vancouver, the business next door had been closed and emptied, so that we thought for a minute that we had left it too late – had they gone out of business?

Inside the little room of no more than 30 seats, every one of them was full of happy lunchers slurping soup and digging into hot stone bowls. Soup is what they do here, for the most part, and they do it very well; it makes up most of the 14 items on a very selective menu. Soup and organ meats, that seems to be their specialty. A small window behind the bar allows a peek into the kitchen where you can watch the chefs squeeze, chop and boil up their house made Korean-style blood sausage. 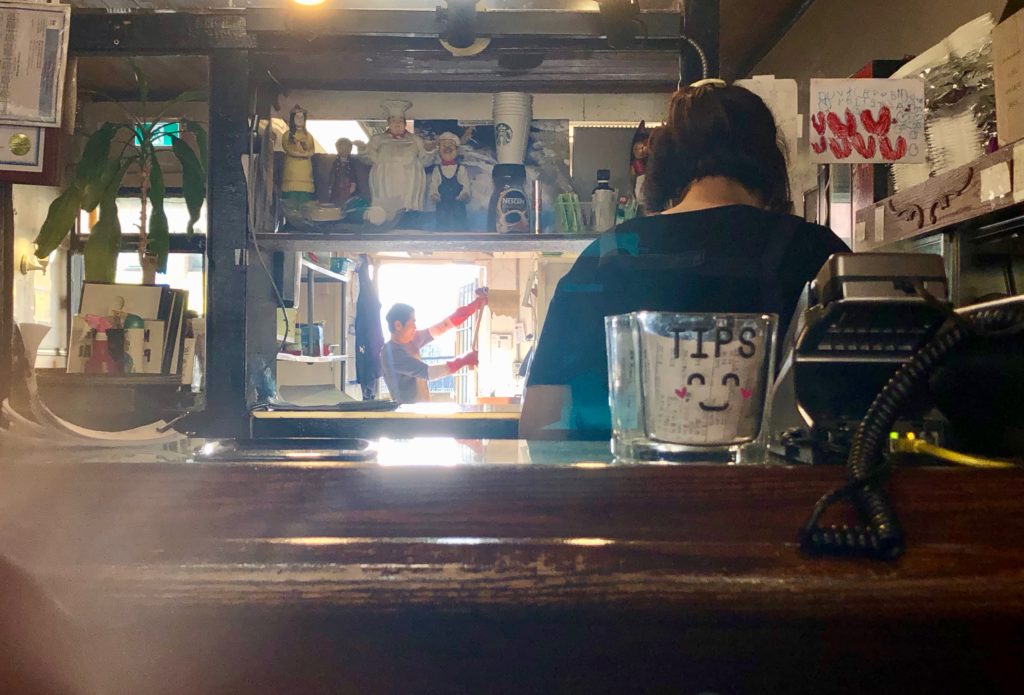 We started with the first item on the menu, soup with blood sausage and organs; might as well dive right in! I went 3 out of 5 on the spice level, and as soon as our server left I noticed our neighbour to my right dabbing his forehead with his napkin, and I immediately feared I’d made a rookie mistake.

I heard the soup before I saw it. It arrived to the table gurgling away in its stone pot, as if reminding you to take a minute to admire the chef’s handiwork–or snap a couple photos for your blog–before you can get a piping hot spoonful anywhere near your lips.

Once it was safe, the soup was hearty and meaty from the ample sausage and tender organs simmering in a simple salty broth that flourished from a good hit of gochujang, a fermented red pepper paste, similar to siracha. There was no scrounging around for the good stuff, either, (you listening, local pho joints?) the meat was more than plentiful. If you can finish a bowl on your own, good on ya.

Next up was the kimchi tofu soup, with soft tofu, ground pork and an egg on top that cooked right in front of us as the bowl boiled away. It was a delicious Ramen-like soup that didn’t last long between me and my companion. The tangy pickled onion and lotus root turned out to be a perfect accompaniment to the spicy-umami of the rich red broth. Man, those pickles were good.

I had brought my friend Chanel who had lived for two years in Korea to help guide me through what I’d heard was quite an authentic Korean dining experience. She told me that one of the things that set restaurants apart from others in Korea was the quantity and quality of sides that are brought to the table at the beginning of your meal. In that regard, put South Castle right up there. Besides the pickles, there was a plate of spicy fermented radish that were sweet and crunchy, and odeng (or eomuk, depending who you ask) a salty fishcake in a sweet vinegar.

After two soups, hearty as they were, we figured we owed it to ourselves to get a taste of South Castle’s version of the Korean staple, the hot stone pot bipimbap. Again, a crackling sizzle heralded its arrival. Subtlety smoky and chock full of crisp veg and sticky rice, it’s about as perfect as comfort food gets.

We set down our slim steel chopsticks, stuffed and happy, grateful to have discovered a true gem in a city that keeps surprising.

South Castle Korean Restaurant is not a place you’ll find flooding your Instagram with filtered pics and punny captions, because they don’t need to. Those that know, know.

(But in case you were wondering about those numbers, a “3” is described as “medium hot,” which, it turns out, is a true descriptor – a definite kick, but not unbearable. So, order a “5: extremely hot,” at your peril. Maybe that’s what our neighbour did.)

South Castle Korean is at 141 2nd St E, North Vancouver, a short walk from the Seabus.