Nothing says summertime more than fresh berries, and blueberries are literally the star berry of the season! There’s no better place to enjoy fresh blueberries than in British Columbia’s Fraser Valley.

It may be surprising to some, but blueberries are Canada’s largest fruit crop by acreage. According to the British Columbia Blueberry Council, Canada is the world’s third largest national producer of highbush blueberries with the majority grown by 800 blueberry growers in British Columbia. The bulk of the B.C. blueberry farms can be found right here in the fertile Fraser Valley!

Indigenous to North America, wild blueberries were highly regarded by the Aboriginal people who picked them for food and medicine. They were referred to as “star berries” because of the five-pointed star on the blossom side of the berry. Cultivated blueberries, known as the highbush variety, started in the early 1900s. Today, 90% of the world’s blueberries come from North America; but blueberries are also grown in Europe, South America, New Zealand and Australia.

The local blueberry season is in full swing and it’s looking like another bumper crop season. Typically, the blueberry season runs from late June to late August/early September with different varieties (early, mid and late season berries) ripening throughout the summer. However, due to unseasonably warm weather during this winter and spring, blueberries were ready for picking by early June. This year’s production is expected to be on par with the 2015 blueberry harvest which set a record for the largest yield ever in British Columbia.

The only thing better than having fresh blueberries is picking them yourself! There are plenty of U-Pick Farms in the Lower Mainland; however, Weller’s Blueberry Farm in Langley is considered by the locals to be extra special, not only for the delicious sweet, juicy berries but also because of the charming owner, 90-year-old Gert Weller. With 10 acres dedicated to blueberries, Weller’s farm is not necessarily the largest, but one of the oldest. He has been growing blueberries on his farm for over 40 years.

It’s no small feat to run a blueberry farm and the past few years have been particularly challenging for Weller, especially with his wife falling ill. Last season’s overabundance of berries was nearly lost by the lack of picking staff, until his grandson reached out on social media for help. The message of the Weller predicament went viral on WeChat (considered the most important social media network in China), which spread the word to the Greater Vancouver Chinese community. Hundreds of local Chinese residents came out to help u-pick and show support, saving Weller’s blueberry harvest from ruin.

Nowadays, Weller continues to cheerfully welcome all the u-pickers that visit his unassuming and no frills blueberry farm, close to Fort Langley. They are there, and some have been returning for years, including the supportive Chinese community to pick some of the best blueberries (no spray) in the Valley, enjoy the scenery, and meet the ever-cheerful Weller. Many of the visitors take time to talk and snap pictures with him.

Do yourself a favour, add a fun berry picking experience to your summer plans in one of the best blueberry regions in the country. And, make a point of visiting the Weller’s Blueberry Farm in Langley for an authentic and local very berry good time!

Use your freshly-picked blueberries to make Kathy’s elegant Blueberry Galette! 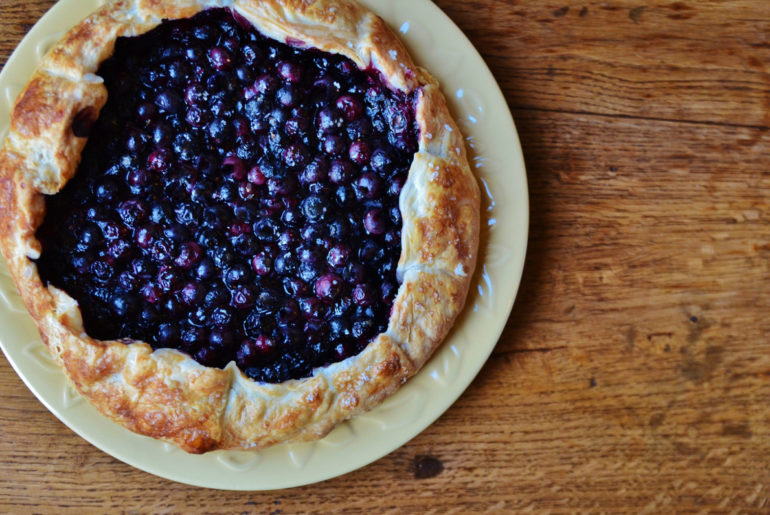