In southern Richmond, there’s a salty maritime breeze where the Fraser River meets the Pacific Ocean. The wood keys of the boardwalk play warm, hollow rhythms underfoot, and seagulls screech and coo on salt-bleached perches. A favourite spot to fly a kite or spend an afternoon with the family, seaside Steveston is a neighbourhood of marine wildlife, cozy shops, and some of the freshest seafood around. Start your day back in 1894 at the Gulf of Georgia Cannery. The building that was once one of the largest producers of canned salmon in BC is now a museum. It still holds much of the original equipment and displays historic photos of the BC fishing industry. Since 1989, visitors have been able to stroll along the pier in Steveston and see for themselves which Pacific seafood is in season at Fisherman’s Wharf. While the busiest time of year is spot prawn season in April and May, there are often fishing vessels set up early in the day with their latest catch year-round. Steveston’s waterside restaurants take full advantage of their direct access to the freshest local seafood, whether you’re in the mood for some fish & chips on the go or are looking to wine and dine in style. Located on stilts that allow the water to flow underneath, Blue Canoe is coastal fine-casual dining at its tastiest. Share a heaping of salty favorites like Dungeness crab, oysters, Atlantic lobster, shrimp, mussels, salmon, and an assortment of sauces to complement. Not to be limited by the ocean shores, there are always meals for those who prefer land-roamers and vegetarian options as well. 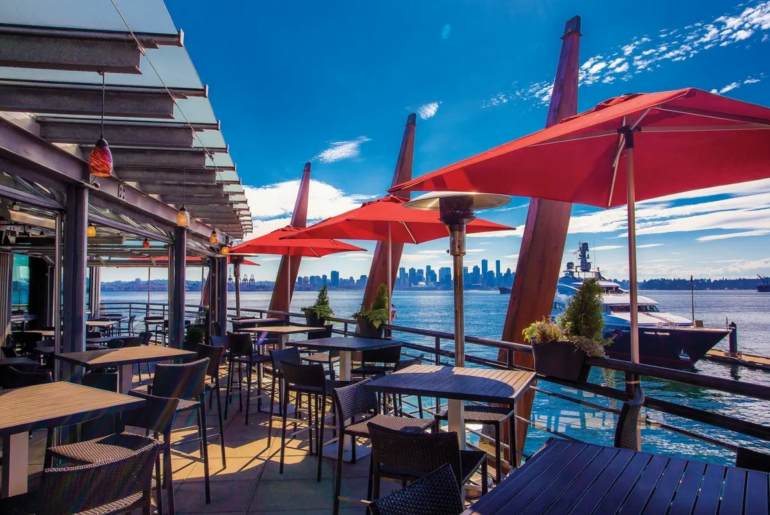